Just a little piece of something much longer. Originally written in 2002.

“Tell me something about you.”

She smiled and stared down at her hands on her lap. “I hate that you’re not holding my hand.” She sighed anxiously and lifted her eyes to his. And his smile was perfect.

He reached onto her lap and took one of her hands in his. He brought it to his lips and softly kissed it.

Their eyes met once again as he rested their clasped hands on his lap. He silently stared with a sweet smile until she broke the silence.

“Your turn.” Her voice was soft and shy.

“Oh… you want to know something about me?”

With barely a moment of thought, he spoke. “I like sitting on the beach in the dark… with your hand in mine.”

She smiled and felt her cheeks warm. “My turn again?”

He nodded and gave her hand a squeeze. And he smiled at her adorable shy blush.

“I love the look in your eyes when you smile at me.”

With his free hand, he reached up to her face and gently brushed the back of his fingers along her cheek. “When you smile, your whole face lights up. It’s beautiful.”

“Maybe.” She struggled to keep her heart from quitting. She loved that he couldn’t take his eyes from hers. And she loved that he seemed to lean closer and closer to her with every breath and every word.

“You know what I want to know?” Still his fingers still touched her face.

“What?” No more worrying about her heart stopping. She could feel it racing.

“I want to know,” he nearly whispered, letting his thumb trace her lips, “if your mouth tastes as sweet and beautiful as it looks.”

She could barely breathe, let alone speak. The best she could do was sigh his name.

“I want to kiss you,” he whispered. “Please tell me you want me to kiss you.”

Desperate to catch her breath, she searched for words. Her lips parted, but only breath escaped. She tried again, sighing softly before finally whispering to him. “I want you to kiss me… please.” 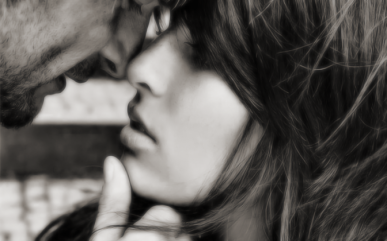 His fingers slid into her hair, his thumb remaining on her cheek. Their eyes closed as his lips softly landed on hers. Sweetly, they kissed, nipping at each other, sucking gently as they teased. Their mouths shyly got to know one another. As their breath mingled between them, he heard the sweetest, softest moan fall from her mouth.

Parting his lips, he pulled her head closer to his. He needed her mouth completely, and she gave it to him willingly. The sweet taste of wine lingered on her tongue, only making him crave her more.

She could feel the pounding of her heart intensify as their kiss deepened. Maybe she should have been in disbelief that she was kissing this man, still nearly a stranger. But she wasn’t. It felt amazing.

When his mouth finally left hers, he lingered near her lips. Softly, they panted together, needing to catch their breath.

He whispered her name. But she stopped him from saying anything more.

She gently touched her finger to his lips. “Shh.” She covered his cheeks with her hands and brought his lips back to hers. Once wasn’t enough. She had to kiss him again.

Again when their mouths parted, they remained close. And again, he spoke.

“I don’t usually kiss a man I just met.”

“You’re just so sweet.” He reached for her face and sweetly pushed the hair away from her eyes. “And irresistible… and I don’t know what came over me.”

She breathed his name. And their lips softly touched once again. “I don’t know either,” she whispered, “but I don’t want to stop.”

Sandra is a writer, blogger, poet, artist, emotional disaster. She thinks far too much and sleeps far too little. Sandra lives in the Northeastern U.S. but dreams of an oceanfront home in Hawaii where she could learn to surf. She loves books, brutal honesty, coffee, and the color black. She hates insincerity, beer, whipped cream, and facebook. And she is uncomfortable talking about herself in the third person.
View all posts by what sandra thinks →
This entry was posted in fiction, fiction friday, series, writing and tagged fiction, fiction friday, fictionfriday, romance, short fiction, whatsandrathinks, writing. Bookmark the permalink.

Because like berries on the vine, we get sweeter over time