I’m sure you think I’m a total bitch. I don’t blame you… not really. After all, I’m still on the group text where you arrange that gathering every summer, but I never say a word. Maybe you don’t even realize I’m still in the group.

It’s not that I don’t have fond memories of you. Well, some of you. [Some of you were, and I’m sure still are, annoying as fuck.] It’s that I am not working and haven’t been since we all got laid off. You have all moved on and have jobs. Good jobs where you seem happy. I’m jobless and unhappy. And I know I can’t handle being around you. 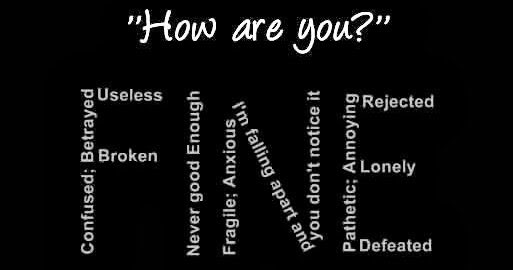 After all these years pretending I’m okay, I should be better at it, but sometimes I can’t keep it together. Being around that many happy [or seemingly happy] people is too much for me. Tears could (would) come and then you’d all know how miserable I am. It would give you something to talk about after I’m gone. Maybe you wouldn’t talk about it, though, because after all this time, you probably don’t even care. I don’t blame you… I’m a terrible friend.

In reality, I was never part of the group anyway. I was always on the outside because I’m just not a social being. We may have had some fun in the office, but I went out with you guys a total of once during the entire time we worked together.

Now that I think more about it, I’m betting most of you thought I was a bitch the whole time… because I know it’s hard for socially capable people like yourselves to understand why it’s so difficult for me to socialize… so difficult that I avoid it.

I feel bad about you especially, J, because I think we were real friends… not just work friends. But I’ve lost all connection to you, too. The embarrassment and shame I feel about my life is all-consuming. I don’t want anyone to know.

So if I didn’t already say it… goodbye.

p.s. — Hey, J? I want you to know that I fondly remember those fake ‘meetings’ we had in your office when we were really just hanging out for an hour drinking coffee. I really did value our friendship. I’m sorry I killed it, but it’s too late now. I’m far too ashamed to ever get back in touch.

Sandra is a writer, blogger, poet, artist, emotional disaster. She thinks far too much and sleeps far too little. Sandra lives in the Northeastern U.S. but dreams of an oceanfront home in Hawaii where she could learn to surf. She loves books, brutal honesty, coffee, and the color black. She hates insincerity, beer, whipped cream, and facebook. And she is uncomfortable talking about herself in the third person.
View all posts by what sandra thinks →
This entry was posted in blogging, challenge, life, writing and tagged #atozchallenge, #atozchallenge2020, challenge, life, random, whatsandrathinks, writing. Bookmark the permalink.