Posted on 2 January 2019 by what sandra thinks

I didn’t post any well wishes. I didn’t write anything. I didn’t do a damn thing. Except disappear.

Miss me? I totally understand if you didn’t. It’s a busy time of year. And I kind of just faded into the background.

I was pretty busy. Even after the holiday. Returning a few gifts, entertaining my kids over school break (although the PS4 helped with this), and un-decorating my house.  But since the holiday has passed, being busy feels different. It feels… not great.

Christmas is totally different for me now than when I was a child (as I’m sure it is for everyone). But there are similarities, the most significant of which is the post-Christmas letdown.

When I was little, I experienced so much excitement and anticipation before Christmas. And Christmas morning was, like, the best time ever. [My parents totally win Christmas. They made it amazing.] Even Christmas day, after the presents had been opened and breakfast eaten, we would take out our new toys and games and movies and play and watch and have tons of fun. But by the end of the day—and even worse the next day—the excitement had died down. Without the anticipation, the hopes, the imagination going wild, it just felt… bad. A little lost. A little hopeless. It felt like there was nothing to look forward to. Sure, next year. But that was too far away. I would get the post-Christmas blues. And even though it’s different now, it’s also the same.

Despite spending very cautiously this year, I was happy with the gifts I had to give. But as always, I felt guilty for the ones I received. Christmas gave me something to look forward to, though. And I needed that. But it’s over now. And I feel as empty as the punch bowl was after Drunk Aunt was through with it.

I’ve started making a list of projects to immerse myself in now that the kids are back in school. But I have no passion for anything on that list. I kind of feel like it will be a miracle if I do any of those things. But I think I need to force myself so I might be able to avoid the pit of despair I know is waiting for me. I’m already falling into it. I need a rope.

I will add, though, that I am grateful for the time with my family and for their thoughtfulness. I often dread family gatherings but I’m trying to work on that. You know, gratitude. That fucking word.

And don’t even get me going on all the New Year’s shit people spout at this time of year. I hate it. I fucking hate it. A new beginning. Ugh. Resolutions. Double Ugh. Shut the fuck up. We all know that whatever you say you’re going to change in the new year will be back to ‘normal‘ within a week. [mini bitch-session over]

As far as my presence here, well, I don’t know. I have 274 unread emails (post notifications and stuff like that). I don’t expect to get to any of them. And as much as I love writing, I haven’t written anything significant in over a year. Everyone keeps telling me it will pass and I’ll be able to write again, but clearly that has not happened. And I’ve given up. I am not a writer. I am, at best, an infrequent storyteller.

I miss my friends. But being here doesn’t give me the happiness it once did. I want the happiness, but right now, I don’t know where to find it. I only know the places where I haven’t found it. 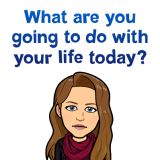 That being said, I haven’t made any firm decisions about anything. I have no plans to stop blogging entirely. And I will probably never remove my blog. I still have my shop and I’m occasionally on twitter and less occasionally on instagram. I just don’t know how often I will be around.

I am always reachable, though, and always willing to talk. In fact, I’m short on people to talk to. So if you’re interested, hit me up. DM (direct message) me on twitter… email me—whatsandrathinks @ gmail.com (remove the spaces)… or just comment here. I will always read and reply to comments.

Maybe I will post here more often than once every two-to-three weeks. Part of me wants to, but part of me is confused and lost about where I’m going, what I’m doing, and what the point is.

Until next time… (or until we talk in the comments of this post, which would be lovely)…

Sandra is a writer, blogger, poet, artist, emotional disaster. She thinks far too much and sleeps far too little. Sandra lives in the Northeastern U.S. but dreams of an oceanfront home in Italy, but she would settle for a non-oceanfront home in Italy, too. She loves books, brutal honesty, coffee, and the color black. She hates insincerity, beer, whipped cream, and facebook. And she is uncomfortable talking about herself in the third person.
View all posts by what sandra thinks →
This entry was posted in anxiety, family, holidays, writing and tagged anxiety, christmas, holidays, whatsandrathinks, writing. Bookmark the permalink.