Posted on 23 December 2017 by what sandra thinks 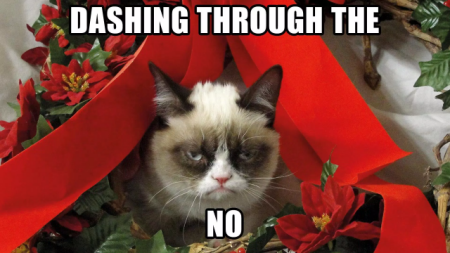 You’ll miss me when I’m gone.

No no no… don’t panic… or rejoice. I’m only going away for a couple of days. We have a tradition of sleeping over at Mom’s house on Christmas Eve… and spending Christmas Day there as well. Although this year, it’s possible we will be there for an extra day because no matter what my bonehead husband says, I am not driving home on Christmas Day if there’s a storm. That shit scares me.

The sleepover tradition started when my two sisters were still single… living alone. (Forget the one who doesn’t speak to me… she has no involvement in this.) They, of course, spent Christmas at my parents’ house. Once I was married, the husband and I would visit for Christmas Eve but then come home and have our own Christmas morning. Honestly, it never measured up. Not even close. It kind of sucked. I missed Christmas morning at my parents’ house. I never really wanted to give it up.

After a few years of disappointing Christmas mornings, I had a baby and we started sleeping over at my parents’ on Christmas Eve. Happy Christmas mornings returned! Of course, it was never the same as it was when I was younger… when I was a little kid or a teenager or even a college student. It was different… but still better than being at home.

I wonder if that has some deeper meaning – loving it so much more at the home where I grew up than in my grown-up home? Maybe. But I’m not going to analyze it because it will thrust many harsh realities of my life into my face and I don’t want to deal with them right now. Or ever.

This year might be a little bit of a challenge. I’ve had a rough year and family gatherings tend to bring me to tears. My life is a mess… a disaster, really. I am a total failure. But I wouldn’t avoid Christmas with my family because of those things. I just try really hard to ignore them. I fail… but I try.

Plus there’s a bit of sadness to every special occasion since everyone who used to be with us isn’t there anymore. My dad, my grandma, my cousin. I just don’t think I want time to pass anymore. It seems to only bring pain and loss.

This week gave me a little perspective, though. In the grand scheme of things, nothing I do or don’t do… nothing I am or am not… nothing about me… really matters at all. My sadness, pain (both physical and otherwise), despair… it’s just… self-involved crap. I feel selfish thinking I matter enough to want those things to get better.

So… to make a long story short (I know… too late), I will likely not be posting tomorrow or Monday. And I didn’t post yesterday either. Fuck, what a slacker. I’m still having writing issues. I can’t form coherent thoughts so I can’t write them down. It’s really irritating. I think it’s slowly driving me mad. I know I need to just look away but I want to write – to post – so much that I stare at the screen and when nothing happens, I cry.

But I guess for a couple of days, I will look away… because I’ll be on a forced hiatus. Unless I schedule posts in advance. Hm… I could try that. But since I can’t write for shit, don’t count on it.

This terribly happy and joyful post is brought to you by Stream of Consciousness Saturday. No editing is allowed… and this week, the prompt is ‘yule/you’ll/Yul.’ Start your post with one of them.

Sandra is a writer, blogger, poet, artist, emotional disaster. She thinks far too much and sleeps far too little. Sandra lives in the Northeastern U.S. but dreams of an oceanfront home in Hawaii where she could learn to surf. She loves books, brutal honesty, coffee, and the color black. She hates insincerity, beer, whipped cream, and facebook. And she is uncomfortable talking about herself in the third person.
View all posts by what sandra thinks →
This entry was posted in holidays, personal, writing and tagged christmas, holidays, personal, socs, whatsandrathinks, writing. Bookmark the permalink.

48 Responses to you’ll miss me. #socs