I have to split this one. Obviously, The Smiths. But I can’t ignore the greatness that is Snow Patrol… so… doubleshot it is. And I’m going to stick a ‘continue reading‘ thing here… because, of course, with two artists, this post won’t be a quickie, so to speak… 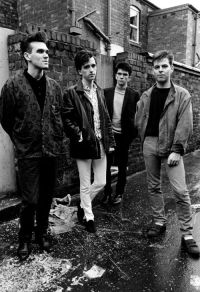 My high school boyfriend [damn, get out of my head, G] introduced me to The Smiths. It was the birth of my obsession with Morrissey that continues today. It’s no accident that my first ‘song of the day’ was a Smiths song. Yes, Morrissey is the master of melancholy… the minister of mope… the monarch of morose. [I’m going to stop making these up now… maybe.] But contrary to what so many people think, listening to him and his woes does not bring me down. I find it comforting. With him around, I’m not alone… someone gets me… whether he knows me or not.

With Morrissey, I feel a weird connection. I’m sure I sound crazy… and I think I can say with certainty that he does not feel a connection to me. I eat meat, for one thing. Heh. I don’t know how to explain this ‘thing’ I have with him. It’s not really a crush-type situation. More like… he’s my soulmate… in a ‘we’re the same‘ kind of way. I’m forever attached to him and everyone in my life knows it. [A much stronger version of the John Mayer thing,] A few months back, my sister in NYC invited me to visit because she had access to tickets to a Morrissey show. I couldn’t go… which sucked… but I think it’s funny that when people in my life hear ‘Morrissey’, they immediately think ‘Sandra.’

I don’t know how to pick a song from The Smiths. So many from which to choose. I guess it’s going to be whichever one grabs me today…

But these lyrics… kind of my anthem in college…

And of course, possibly the most recognized Smiths song ever…

How Soon Is Now?
I am human and I need to be loved
Just like everybody else does
…
There’s a club, if you’d like to go
You could meet somebody who really loves you
So you go and you stand on your own
And you leave on your own
And you go home and you cry
And you want to die
When you say it’s gonna happen now
When exactly do you mean?
See I’ve already waited too long
And all my hope is gone

But today… I think this truly honors the maestro of misery…

Heaven Knows I’m Miserable Now
[In the interest of post length, I’ve just grabbed some lines…]
I was happy in the haze of a drunken hour
But heaven knows I’m miserable now

I was looking for a job, and then I found a job
And heaven knows I’m miserable now

In my life
Why do I give valuable time
To people who don’t care if I live or die?

In my life
Why do I smile
At people who I’d much rather kick in the eye?

In my life
Oh, why do I give valuable time
To people who don’t care if I live or die? 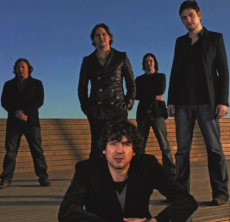 I fell in love with Snow Patrol well before I ever heard Chasing Cars (which was even before that song popped up on various tv shows). I fell in love the moment I heard Run… almost 15 years ago. Gary Lightbody has one of the most beautiful voices I’ve ever heard. I think that’s why I tend to like the slower songs where I feel I can hear more vocals than music. Kind of. But as noted, I know squat about the technical stuff. I just adore this man’s voice.

I had some difficulty choosing a song to feature… which is why I’m linking every one I mention. I almost chose New York, but I already posted that one way back… so I thought I’d choose something else. Crack the Shutters feels like soundtrack material to my ‘secret book’… so I’m quite attached to that one. Really, any choice I make will be the right one. I can’t possibly go wrong. I could keep listing songs… but I will spare you. Just listen…

I finally chose Dark Roman Wine. Because it’s beautiful… [The video following is from an amazing live show…]

The wind shakes the branches above us
And the cars shake the ground at our backs
But the dark roman wine in our bloodstreams
Makes the cold just a word, just a sound

other s artists worth a listen
Smashing Pumpkins — Best song Billy Corgan ever wrote… Disarm
Sheila Divine, the — Local band with one of the best songs ever recorded… Hum
Strokes, the — This song makes me happy. I have no explanation… Last Nite

#atozchallenge | music
© 2017 what sandra thinks
[I am not the owner of any rights to the music (song, lyrics, video) featured in this post…]

Sandra is a writer, blogger, poet, artist, emotional disaster. She thinks far too much and sleeps far too little. Sandra lives in the Northeastern U.S. but dreams of an oceanfront home in Hawaii where she could learn to surf. She loves books, brutal honesty, coffee, and the color black. She hates insincerity, beer, whipped cream, and facebook. And she is uncomfortable talking about herself in the third person.
View all posts by what sandra thinks →
This entry was posted in challenge, music, writing and tagged #atozchallenge, #atozchallenge2017, #atozchallenge2017music, music, snow patrol, the smiths, whatsandrathinks, writing. Bookmark the permalink.