I have seen John Mayer live six times. He was here three days ago… but I didn’t go this time. I hate that I didn’t go… But damn… shows are expensive now. I was spoiled when I was much younger and I could get a great seat for less than $40. I haven’t been to a live show for a while. Things also got more complicated when he had kids… really only my father-in-law ever watches them for us.

Speaking of my father-in-law… A few years back, he (in his late 60s at the time) saw that there was a John Mayer show coming up in Boston so he made sure he was available that night to watch the kids… before we asked… before he knew whether or not we were going to the show. Ha! I thought that was funny… and very sweet of him. 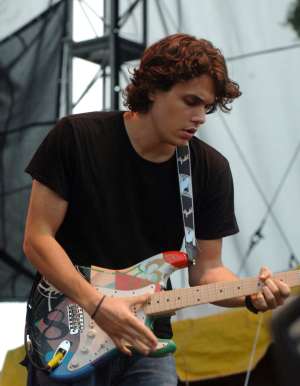 While I’m mentioning non-music things… the long hair thing he had going on for a while? Not the weird-ass country cowboy hat look he had for a bit. *shudder* I’m talking about the ‘Waiting on the World to Change‘ hair. Lots of people hated it but that’s my favorite look he’s ever had. [The nice arms don’t hurt either. Sigh.]

He had a breakdown of some sort around 2012-2013. Okay, I made that up, kind of. But it was during these years that he got a little… country-ish. *shudder and weep* I was devastated. More than I should have been. How could this happen? It’s like I said in the Hozier post – when an artist releases new music, I always have a little bit of fear that I won’t like it… and my love affair with his music will never grow. (Yeah, ‘his’… it’s always a male…) Well… that fear was realized with John. What he’s released this year doesn’t do much for me… but at least he isn’t totally buried in that genre that shall not be named again. *shudder*

But let’s go back to the good stuff…

My favorite live show was the one time I decided to overspend and buy my tickets on ebay. Surprisingly, I got a good deal. They cost less than the regular ticket price you’d pay now. They were supposed to be 4th row seats, but the dude emailed me after I paid him and told me he hoped I didn’t mind that the tickets he was sending me weren’t those 4th row seats. He was sending 2nd row seats instead. Woo hoo!

I am not a screamer. At live shows. Especially this one. I was so close that I was just in awe. Then there was the eye-contact. Of course, there were tons of people around me and I’m not delusional or anything… maybe he wasn’t looking at me at all. But the horrible frat boys immediately in front of me left early. So obviously, I had jumped the seats. I was in the front row. And I like believing he was looking at me… so I do. I was right there… it’s totally possible. Hey, we all like to feel special, don’t we?

Still is the light, of your room
When you’re not inside
And all of your things
Tell the sweetest story line
Your tears on these sheets
And your footsteps are down the hall
So tell me what I did
I can’t find where the moment went wrong at all
[…]
What will this fix
You know you’re not a quick forgive
And I won’t sleep through this
I survive on the breath
You are finished with

You can be mad in the morning
I’ll take back what I said
Just don’t leave me alone here
It’s cold, baby
Come back to bed

Oh I’ll never know
What makes this man
With all the love
That his heart can stand
Dream of ways
To throw it all away
[…]
Oh twice as much
Ain’t twice as good
And can’t sustain
Like one half could
It’s wanting more
That’s gonna send me to my knees
[…]
Oh gravity, stay the hell away from me
And gravity has taken better men than me
Now how can that be?

I’ve posted other John Mayer songs before today… but I’m not going to look them up and link them. You can find plenty of him on youtube.

other j artists worth a listen
Jeff Buckley — Tragic… This is one of the most beautiful things I’ve ever heard. Hallelujah
The Jesus and Mary Chain — I just love this song. Head On

#atozchallenge | music
© 2017 what sandra thinks
[I am not the owner of any rights to the music (song, lyrics, video) featured in this post…]

Sandra is a writer, blogger, poet, artist, emotional disaster. She thinks far too much and sleeps far too little. Sandra lives in the Northeastern U.S. but dreams of an oceanfront home in Hawaii where she could learn to surf. She loves books, brutal honesty, coffee, and the color black. She hates insincerity, beer, whipped cream, and facebook. And she is uncomfortable talking about herself in the third person.
View all posts by what sandra thinks →
This entry was posted in challenge, music, writing and tagged #atozchallenge, #atozchallenge2017, #atozchallenge2017music, john mayer, music, whatsandrathinks, writing. Bookmark the permalink.