My favorite job.
I have never had what I would consider my ‘dream job‘. It’s not because I didn’t work hard enough to get it. It’s because I don’t know what my dream job is. If I could figure that out, maybe I would work my ass off to get it. [Although, my motivation isn’t what it used to be. In fact, it doesn’t actually exist anymore. Maybe that would change if I actually had a goal.]

My favorite real job was working at a technology news website. I worked with the advertising team—managed a small group on the operations side. [I started as an operations assistant to the VP and his team, but was promoted after 6 months.] The work environment was amazing. Free coffee [that was very good], soda machine that was free, excellent benefits, great pay, cool coworkers [for the most part], and parking—rare for the location. 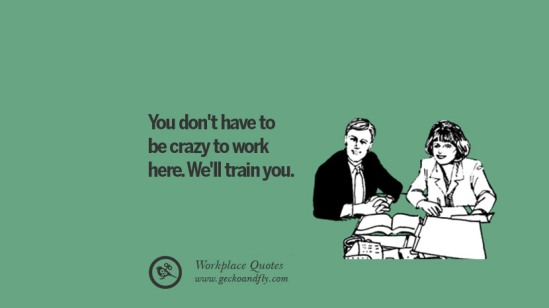 I never thought I was management material, and I only had a few employees under me, but I did a good job. Everyone loved me. They were just as devastated as I was when I got laid off. The company was bought by a competitor and more than half the staff was cut [after all the rounds of layoffs, I think it was more like 75%]. I worked with the ad sales team all the time, and that whole team came to see me with a lovely gift on my last day. I even got calls and gift deliveries from the satellite ad sales offices. I was happy there… for almost six years… and then poof! It was gone. I did get a nice severance package [and all those Post-It notes I snuck into my box of personal items], but to this day, I’ve never had a job I really liked again.

I tried, obviously, to get a similar job elsewhere, but I couldn’t find one. The industry kind of fell apart a little bit. Eventually I got another job, but it was a step down. It was okay, but I hated it some days. I did have a great VP there. He was one of the best people I’ve ever met. After two promotions, I ultimately got laid off from this company, too. I wasn’t so sad about it, though.

I’m unemployed now. And I have no idea where to go from here. I’m just being Mom for now. I do feel like I need something more, but I don’t want to work outside my home anytime soon. [And yes, I’ve searched for ALL of the usual work-from-home jobs. Nothing ever worked out. I hate how people make it sound so easy. It’s not even a little bit easy.]

It’s also hard to know where to go and what to look for when I have no idea what I want.

One last thing.
I had this other job for a few years that I didn’t love. On my last day, I noticed that I still had a bunch of paperwork on my desk that belonged to the bitchiest manager I ever worked for in my life… so I tossed it in the shred bin on my way out. But that’s beside the point.

I bring up this job because of a temp. My team needed an extra person for a few weeks—to work with me. She was my temp. The day she was to start, I got a call from reception that she had gotten a permanent job elsewhere so she wasn’t coming but they sent a replacement. When I walked up front to meet my temp, the only person in reception was an incredibly hot young man.

He stood up and walked over to me. Gasp. ‘Hi, are you Sandra?‘ Gulp. He was for me. The hot temp. He was mine. We worked together for a month, lunching together, talking and laughing and generally having a great time for weeks. I was so disappointed they didn’t hire him permanently. And sadly, the closest we got were the aforementioned lunches, talks, and laughs… and a big hug goodbye.

p.s. — I worked in two doctors’ offices. My dad in RI and another doctor in Maine. Not that the locations are relevant. But I hated both of those jobs. All those patients? All those phone calls? All that interaction… with lots of sick people… some who yelled at me because the doctor was too busy to see them immediately… and some who were just mean in general… ugh. No.

The only redeeming thing was that I worked with a nurse at both of those offices, and they were awesome. In Maine, it was like I had a second mom. We hung out after work… went out to eat… went shopping. She lived on a lake, and I used to visit with my boyfriend at the time [David, the one that got away] and we’d row her canoe all over the lake. I miss that. Still hated the doctor’s office job, though. That doctor was a total hippie, though. He was pretty cool.

Sandra is a writer, blogger, poet, artist, emotional disaster. She thinks far too much and sleeps far too little. Sandra lives in the Northeastern U.S. but dreams of an oceanfront home in Hawaii where she could learn to surf. She loves books, brutal honesty, coffee, and the color black. She hates insincerity, beer, whipped cream, and facebook. And she is uncomfortable talking about herself in the third person.
View all posts by what sandra thinks →
This entry was posted in challenge, life, writing and tagged #atozchallenge, #myfavorite, atozchallenge2021, challenge, life, whatsandrathinks, writing. Bookmark the permalink.