Posted on 6 October 2017 by what sandra thinks 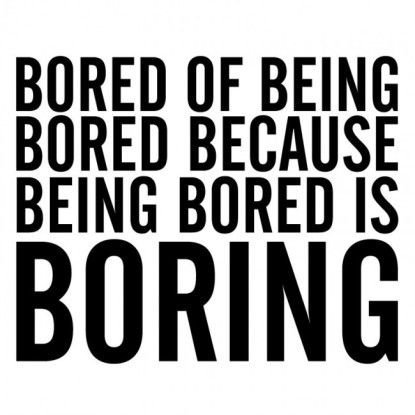 It’s sad. I know it is. But I find myself wasting time.

It’s not that I don’t have anything to do. It’s quite the opposite. I have tons to do.

I could list those things (I, in fact, have a list… it sits there on the fridge). So I don’t need suggestions. That’s not the point.  This is about wasting time. Lately, intentionally.

I keep posting about how empty I feel… and the other part of that is… how bored I am. Nothing sounds appealing to me. Everything sounds incredibly boring. I am only less bored when I’m with the kids (and occasionally my husband but… eh). But even when others are home, I’m still bored. I think it’s in my head… not necessarily about what’s around me.

I do need time away from the kids. But lately, from the time I return home from dropping them off at school until it’s time to pick them up, I’m waiting for time to pass… but I’m not really doing anything worthwhile. I’m wasting time… on purpose. I don’t know why I can’t get myself to do something relevant and valuable with that time.

Maybe the graphic design stuff I’ve been doing for my shops is worthwhile. But it’s probably not. I don’t know how to get customers. There are so fucking many shops out there selling stuff similar enough to mine that the chances someone will find me and buy from me are so slim it’s (almost) pointless.

So I stare at a screen (phone, laptop, television… pick one… or more) and try to find ways to waste the hours until pick-up time. I know it’s awful… most people would give anything for a few hours to themselves every day. And I used to love it. I always had something to do… something I wanted to do… something I was thrilled I had time for. And hell, I still always have something to do. But… I guess I used to be more motivated.

I have an explanation… two, actually. When I’m alone, I think about all that’s wrong in my life. And there’s a lot. I can’t stop and it slowly, painfully kills me. I know… blah blah you can change anything… blah blah you can do anything you want… blah blah fuck off (no offense). Those ‘change‘ clichés are lies. Total fucking BS. What I want to change… what I want to do… I’m not really sure what those things are. But anything I can think of requires things I don’t have… money, ambition, my youth. So no matter how hard I try, I can’t change anything because it requires changing something in the past which, obviously, is impossible. It’s too late for anything I do to matter. I know… blah blah no it’s not… blah blah fuck off (no offense). Even if it isn’t too late, which it is, I feel that it is so it is. For me. Yeah yeah… I know.

The other explanation is just… me. I don’t enjoy being alone unless I’m truly immersed in something… because if I’m not, I’m just sitting there with only me… with no distraction from me… and I hate me.

But… (I know, I’m going in circles, at which I seem to excel)… I am not truly immersed in anything lately. So I’m stuck with me.

Writing is missing. Yeah, I’m writing this. But I have no fiction projects going right now. Not really. I think that’s leaving a gaping hole in me. Of course, I often feel like my fiction writing is also pointless. Poetry… every once in a while, I’ve got something but not much. There’s an empty space where writing used to be. I hate it.

In short (too late), I’m just wasting time… and it’s sad… but it keeps happening. Oh hell, this whole post has been a way for me to waste time. (Mine and yours… apologies…) And I’m relieved that it’s Friday… and that it’s a long weekend (here in the US… Columbus Day is Monday) because I won’t be alone again until Tuesday. When I have a dentist appointment. Oh, and it’s my wedding anniversary… eh. (No, I will not use ‘meh’ because I hate that…. and because when I make the ‘I don’t care’ sound, it’s ‘eh’. So there.)

Time to pick up the kids.

Sandra is a writer, blogger, poet, artist, emotional disaster. She thinks far too much and sleeps far too little. Sandra lives in the Northeastern U.S. but dreams of an oceanfront home in Italy, but she would settle for a non-oceanfront home in Italy, too. She loves books, brutal honesty, coffee, and the color black. She hates insincerity, beer, whipped cream, and facebook. And she is uncomfortable talking about herself in the third person.
View all posts by what sandra thinks →
This entry was posted in life, parenting, personal, writing and tagged family, life, parenting, personal, time, whatsandrathinks, writing. Bookmark the permalink.