Posted on 30 September 2017 by what sandra thinks

Stream of Consciousness Saturday.
No editing is allowed… (painful for me… I usually proofread a post 20 times…) 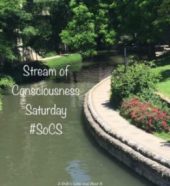 This week, the prompt is ‘do/dew/due‘…

“Do” is a problem for me. I can’t do lots of things. I don’t mean I can’t do brain surgery or small engine repair. I mean I can’t do normal things. Things that are no big deal to most people. Like ‘just make a phone call’ or ‘just get out of the house’… or other such things that I often cannot do.  I thought I was lazy. And I guess I am a little lazy. But a friend (♥) recently told me… it’s not laziness… it’s depression. And logically… intellectually… I know she’s right. Problem is, I always feel like depression is an excuse. Maybe because I blame myself for everything… including my depression.

Having nothing to do with the first paragraph… You know what I hate? I hate when I put my sandals on and go out to the car in the morning and step into the grass, whether intentionally or not, and my sandals and my feet get wet. And then I’m in the car wiping my sandals and toes with a Dunkin’ Donuts napkin I had stuffed in the glove compartment. I hate when I step in dew. (I also hate when I write a really long run-on sentence… but no editing… ha!)

And another thing… I don’t know what to do about the shop name situation. Every time I think I’ve found the one, something happens to ruin it for me. Whether it’s some conflict online where I could get a cease and desist… or something else that just makes me think I can’t use it or makes me not like it anymore. UGH. I have a couple right now that I’m still hanging on to… coffee bean, coffee crush, mesh and paper (that is from a song, partially… bonus points if you can figure it out), air and coffee or coffee and air (because you need both to live)… or something else entirely. I’m not even sure I should include coffee because I don’t want people to assume I’m selling coffee or coffee-related items before they even visit the shop. UGH again.

So… I hate that I can’t do and I hate dew and I hate not knowing what to do.

I think I’ve paid my dues. Seriously. Shit goes wrong in my life constantly. I’m convinced that I’m cursed. Everything in my life turns to crap. Even my kids have terrible things happen to them. My curse is rubbing off. It’s so unfair to them… it’s not their fault. They’re innocent kids. Even if I did something to deserve the curse… they didn’t.

[I know… I know… there are decent things in my life. I get it… but that doesn’t change that something is always fucking going wrong. It’s hard (impossible) to enjoy the ice cream when it has dead bugs sprinkled all over it.]

I think I’m due for something good. Really good. Hell, more than one something. Come on, Universe! I’ve more than paid my dues. I’m sick of this doodoo (bonus form of do). Can’t I get a break? What the hell do I have to do?

Sandra is a writer, blogger, poet, artist, emotional disaster. She thinks far too much and sleeps far too little. Sandra lives in the Northeastern U.S. but dreams of an oceanfront home in Italy, but she would settle for a non-oceanfront home in Italy, too. She loves books, brutal honesty, coffee, and the color black. She hates insincerity, beer, whipped cream, and facebook. And she is uncomfortable talking about herself in the third person.
View all posts by what sandra thinks →
This entry was posted in blogging, writing and tagged socs, whatsandrathinks, writing. Bookmark the permalink.