I haven’t really been doing awards for a while but I’m always up for the fun of answering questions. Plus, I’ve had a lot of new followers lately and I thought this might help them get to know me. Although that may backfire.

My new snarky friend at Supernatural Snark nominated me for the Mystery Blogger Award. Then… another new friend at Outside Perception, who was also nominated by my previously mentioned new friend, nominated me as well. Confused yet? Me, too.

I need names… or something! I don’t know what to call you…!

Supernatural Snark’s questions:
1. Fave Backstreet Boys song?
I was going to be a ‘snark’ and name an *NSYNC song but I don’t want anyone to hurt me (Bye Bye Bye *smirk*). Um… I’m choosing Everybody (Backstreet’s Back) because it’s at the end of the movie This Is the End which is inappropriately hilarious.

2. If you had a superpower what would it be and why?

Does time travel count? Well, The Flash can run fast enough to travel through time so I’m going with that. I have a few corrections I need to make in my past. I know… my whole current reality will be different. But… that’s kind of the point!

3. If I offered you the chance to become invisible or a million dollars which one would you accept?
I’m unemployed so I need the money. I’d say invisible but I don’t think, even while invisible, I could live with myself for robbing a bank. Plus whatever I steal wouldn’t be invisible… it would be mysteriously floating away…

4. Have you ever eaten ice cream with a fork?
Many times… at birthday parties. Cake with a scoop of ice cream – I eat the whole thing with a fork.

5. Can you touch your nose with your tongue? (I can’t, LOL).
No… I can only do the tie-a-cherry-stem-in-a-knot-with-my-tongue thing.

Outside Perception’s questions:
1. Tell us about something that you used to believe only to find out it was incorrect?
Santa Claus. Enough said.

2. If given the choice between Cake or Death… what would it be?
Why did I struggle with this question? Hm. Cake then death? Then restart?

3. What was your imaginary friends name and what special skills did they have?
I never had one as a child. I have an imaginary character in my head now… for writing fiction… he has several special skills, some of which are inappropriate for general audiences. 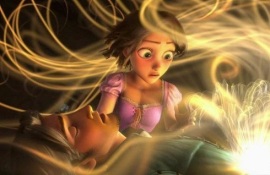 4. What is your all time most watched movie?
Tangled (yes, the Disney animated film)

5. When you have downtime… (Laugh.. yah I know) Ok, If you ever had downtime… What would you do?
As previously mentioned, I’m unemployed. But I’m also a mom so while you’d think I have lots of downtime, I really don’t have very much. When I do… I write. Or read. Sometimes I bake. Also, Candy Crush relaxes me.

There it is… Another reason for me to post a picture of Flynn Rider. And more stuff about me you probably didn’t need to know. But now that you do, try not to hold it against me.

Sandra is a writer, blogger, poet, artist, emotional disaster. She thinks far too much and sleeps far too little. Sandra lives in the Northeastern U.S. but dreams of an oceanfront home in Hawaii where she could learn to surf. She loves books, brutal honesty, coffee, and the color black. She hates insincerity, beer, whipped cream, and facebook. And she is uncomfortable talking about herself in the third person.
View all posts by what sandra thinks →
This entry was posted in award, blogging, writing and tagged award, blogging, whatsandrathinks, writing. Bookmark the permalink.