[Disclaimer: I apologize if you are a huge Zippy fan. Do those exist?] 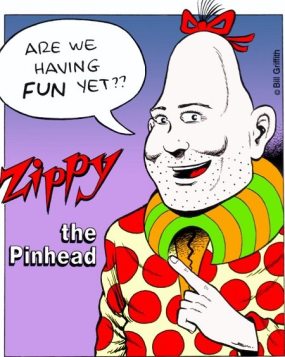 Are we creeped the fuck out yet?

Zippy has been around for a long time… since the 70s… which is amazing because he may be the creepiest-looking comic character ever. It’s not that the strip is so awful… it’s really not. I just can’t get past how creepy he looks. He’s, like, an extra-creepy clown. And clowns don’t need extra creepiness. Do you watch American Horror? There was a murderous clown… it made me think of Zippy. That can’t be good.

Zippy scares people. For real. In college when my then-boyfriend and I started our own little comic newspaper, we used to read all the newspaper strips… including Zippy. (Yes, in the comics section of an actual newspaper… that was made of actual paper.) We had a friend who was particularly creeped out by Zippy so we would cut the strips out (Sunday’s color strip was best) and hide the clippings in her dorm room. I think we gave her nightmares. Damn, we were mean! But it was hilarious.

This isn’t much of a rant, but I’m burnt out. And z was too hard.

I hope I didn’t give you nightmares. Not from this, anyway… 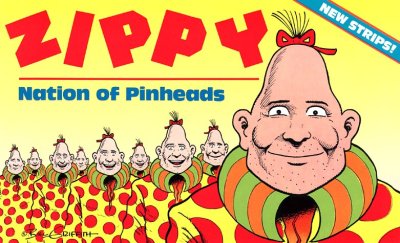 Sandra is a writer, blogger, poet, artist, emotional disaster. She thinks far too much and sleeps far too little. Sandra lives in the Northeastern U.S. but dreams of an oceanfront home in Italy, but she would settle for a non-oceanfront home in Italy, too. She loves books, brutal honesty, coffee, and the color black. She hates insincerity, beer, whipped cream, and facebook. And she is uncomfortable talking about herself in the third person.
View all posts by what sandra thinks →
This entry was posted in challenge, writing and tagged #atozchallenge, #atozchallenge2017, #atozchallenge2017bitchfest, rant, whatsandrathinks, writing, zippy the pinhead. Bookmark the permalink.