my boy.
Yesterday was my son’s so-called Moving On ceremony. A fancy way to say graduation for 5th graders. Next year, he goes to middle school. I am now going to ramble on about how wonderful and amazing my kid is.

stupid music.
Pomp and Circumstance always makes me cry. Of course, pretty much any of my kids’ events make me cry. Maybe it’s that they’re getting older… which is not sad, really, but… yeah, I cannot explain myself. If you’re a parent, you probably understand. 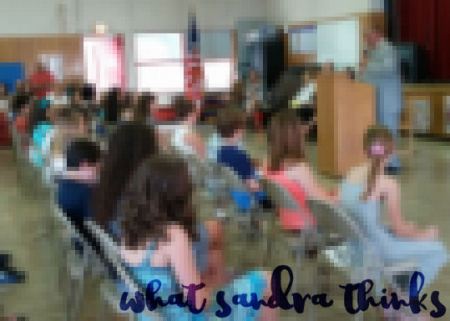 Yes, one of these kids is my son.

teacher with guitar.
The school has one male teacher. This is not uncommon in elementary schools… at least not around here. He teaches 5th grade… and at first, my son was disappointed he wasn’t in Mr. L’s class. But when he later learned that Mr. L gave more homework, he was fine with Mrs. R. Still, the kids traded off classes for a couple of subjects so he was with Mr. L sometimes anyway. This guy was great… I hope my daughter is in his class. But I’m completely off topic now…

At every event involving any sort of singing at that school, Mr. L is up there with his guitar, playing while the kids sing. And of course, yesterday the kids had to sing the school song. And an original song written by Mr. L. It was fun to watch. Especially my boy who hates to be in front of crowds. (I still don’t know how he got through the spelling bee finals!)

no applause, please… just throw money.
He got a diploma. His was the first name called for Read at Home award – given to students who read at least 30 minutes each night at least four days each week for the entire school year. (Yeah, I had to sign off daily…) He was also one of the recipients of the Citizenship Award – a certificate and a medal. And finally, the Presidential Education Award for Outstanding Academic Excellence complete with a letter from President Obama and a pin for his lapel. (Ha! He has never worn anything with a lapel… ever.) 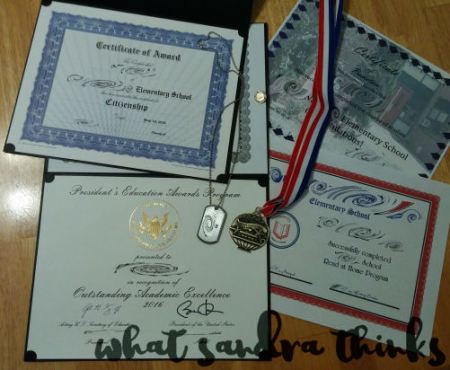 Many pictures were taken of the boy with his friends, Mrs. R, Mr. L, and the principal Mr. M. Much to my surprise, Mr. M announced that the kids could go home with their families. It was only 11am. Even my daughter got to bail on the rest of the school day. [My husband and I were actually going to go out to lunch together… just the two of us. Fail!]

Upon arriving at home, the boy sat at the computer and proceeded to earn points on his ‘math academy’ site that he’s supposed to visit over the summer before middle school starts in the fall. He’s not even out of school yet!

He’s such an amazing kid. No, really. For six years (more than that – during preschool, too…), I’ve had teachers tell me what a smart, helpful, motivated, talented kid he is. Mrs. R told me that he spoke up and debated her on a math question. And ultimately, he was correct and she let him tell the class. I love that she was proud of him for that. She also told me that he’d been concerned he wasn’t reading as many books at home as some of the other students. Of course not, she said, because he’d been reading 500 – 600 page books!

I can’t believe I was worried about him on his first day of kindergarten because he was such a shy kid. He made friends right away and has made many more over his 6 years at the school. I think I’m more anxious about him going to middle school than he is.

[Of course, this is not to slight my daughter. Next year, she enters 3rd grade, and with that, she moves from ground level to upstairs. (Downstairs K-1-2, Upstairs 3-4-5) It’s a big deal to the kids at her school. She’s also the sweetest, most caring, beautiful (looks just like me), intelligent, creative girl in the world. (And I’m totally objective.)]

Sandra is a writer, blogger, poet, artist, emotional disaster. She thinks far too much and sleeps far too little. Sandra lives in the Northeastern U.S. but dreams of an oceanfront home in Hawaii where she could learn to surf. She loves books, brutal honesty, coffee, and the color black. She hates insincerity, beer, whipped cream, and facebook. And she is uncomfortable talking about herself in the third person.
View all posts by what sandra thinks →
This entry was posted in parenting, the perk, weekly perk, writing and tagged children, happiness, the perk, weekly perk, whatsandrathinks, writing. Bookmark the permalink.