Why does iced coffee cost more than hot? I get that the large iced is giant compared to the large hot. However… there’s a fucking lot of ice going on in there. No way I’m actually drinking more coffee. Fuck, it’s probably less! Do not even tell me they charge to chill it. Or for the ice. Bastards. And I’m one of those freaks who often gets iced coffee in the middle of January, too.

Why is it always one of the hottest-in-hell days when I have to bake something? My son has an end-of-the-year party in one of his classes tomorrow. ‘Can you make brownies?‘ he asked me. Sure I can. When do I say no? (Not often enough, I’m sure.) So at 8:45 this morning, I was baking brownies. Despite it already being 85°F and kinda sticky. And now it’s 93. Gross. Thank god for AC. But still… I hate to use the oven on days like today. Wonder what’s for dinner.

Why did WP notify me that I have 1337 followers? Why is this a milestone? Well, I’ll tell you. I had to look it up because apparently I’m not enough of a nerd.

Leet (or “1337“), also known as eleet or leetspeak, is an alternative alphabet for many languages that is used primarily on the Internet. […] The term leet is derived from the word elite. […] The term leet is also used as an adjective to describe formidable prowess or accomplishment, especially in the fields of online gaming and in its original usage—computer hacking.(Wikipedia)

Am I elite now? All I know is I was not nerdy enough to know any of that ^ without a little research…

Why do I wake up every morning with a list of about 12 things I want to accomplish and then before I know it, it’s noon and I haven’t done squat? My motivation is seriously lacking. How does one get motivated? For anything, I mean. I guess I’m kinda lazy… because I’ve never been good at being motivated.

Why do I write silly boring posts like this? Especially when I should be doing something else?

Oh… one last thing… is this as funny to you as it is to me? 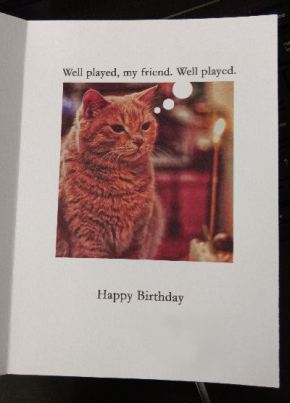 Sandra is a writer, blogger, poet, artist, emotional disaster. She thinks far too much and sleeps far too little. Sandra lives in the Northeastern U.S. but dreams of an oceanfront home in Hawaii where she could learn to surf. She loves books, brutal honesty, coffee, and the color black. She hates insincerity, beer, whipped cream, and facebook. And she is uncomfortable talking about herself in the third person.
View all posts by what sandra thinks →
This entry was posted in writing and tagged baking, coffee, milestone, random, whatsandrathinks, writing. Bookmark the permalink.