Posted on 6 January 2022 by what sandra thinks

Who is someone that inspires you and why?

I may be a bit vague on this because I don’t want to expose every detail of my daughter’s life, but she truly inspires me.

As you know, I suffer from depression and anxiety. It’s a constant, lifelong battle that I’m not winning. Yesterday’s post elaborates on that.

Through genetics or just life, my daughter also has to deal with depression. Yeah, I feel incredibly guilty about that since she likely got it from me, at least in part. But my guilt is not the topic here.

She went through a difficult time that lasted over a year, and then she fought. She refused therapy and medication. I wasn’t going to force her to try either, so she didn’t. Instead, she found her own way. Is she cured? Of course not. There is no cure for depression. (Fucking sucks.) But she is better.

She did a lot of research. She must have done more than I ever have because everything I’ve read says the same thing: support system, exercise, healthy eating, sleep, etc. You know, things that every human needs, not just those with depression. But my daughter found something more. She found something to believe in. She found hope.

And that is what my daughter did.

She came up with a plan. If something didn’t “fit“, she changed it into something that did. And she followed her plan. She didn’t give up. She worked so hard, and she still works hard. She helped herself. She helped herself more than I’ve ever seen any therapist or medication help anyone.

She inspires me for many reasons, but the most glaringly obvious one is that she was able to do something I’ve never been able to do—kick depression’s ass. Her depression is still there, but it’s sitting in a corner offstage now, not running the show.

I told her I wish I was more like her. She told me I was crazy. But I stand by my wish. And I stand by her. 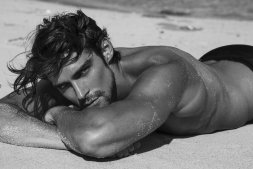 My girl does not find these men attractive. It’s disconcerting because I know she wasn’t switched at birth. She looks just like me.

p.s. — Should I try everything my daughter did? No. She’s doing what works for her. Some of it might work for me, but I have to find my own way. I have to figure out how to change my mindset. Will I drop my medication and go it alone? Not right now, but if I can be as strong as she is, maybe someday.

Sandra is a writer, blogger, poet, artist, emotional disaster. She thinks far too much and sleeps far too little. Sandra lives in the Northeastern U.S. but dreams of an oceanfront home in Hawaii where she could learn to surf. She loves books, brutal honesty, coffee, and the color black. She hates insincerity, beer, whipped cream, and facebook. And she is uncomfortable talking about herself in the third person.
View all posts by what sandra thinks →
This entry was posted in blogging, challenge, life, writing and tagged bloganuary, blogging, challenge, life, whatsandrathinks, writing. Bookmark the permalink.

25 Responses to 06 january – my inspiration. #bloganuary